After exciting audiences and critics alike after the release of their debut LP in 1980, The Cramps had a couple of changes to make in time for their second release in 1981. Firstly the band lost guitarist Bryan Gregory, and secondly, the band left the East Coast and joined California set in Los Angeles. In December 1980, the band recruited the services of guitarist Kid “Congo” Powers, or Brian Tristan as he was known to his parents, just in time for the recording of their second LP to take place in January 1981 at AGM Studios, California. Released in May 1981, Psychedelic Jungle by The Cramps released on Illegal/IRS was The Cramps second studio release and for the first time was produced by the band themselves with quite surprising results. As a piece of work it is a lot more controlled than Gravest Hits and Songs The Lord Taught Us, overall creating a more rounded and sinister feel than heard previously. There is still no bass to be found, the album remains a mix of covers and originals, the vocals remain glorious and the fledgeling dual guitar partnership of Ivy and Powers does not show any signs of faltering in its infancy, but there is most definitely an air of maturity creeping ever so slightly into The Cramps style here. The album begins with a cover of a little garage gem known in collector circles; the original version of Green fuzz is a crackly primitive sounding marvel recorded in the middle of the night in a roadside café in Texas back in 67 by Randy Alvey.

A1. Green Fuz
A2. Goo Goo Muck
A3. Rockin’ Bones
A4. Voodoo Idol
A5. Primitive
A6. Caveman
A7. The Crusher
B1. Don’t Eat Stuff Off The Sidewalk
B2. Can’t Find My Mind
B3. Jungle Hop
B4. The Natives Are Restless
B5. Under The Wires
B6. Beautiful Gardens
B7. Green Door 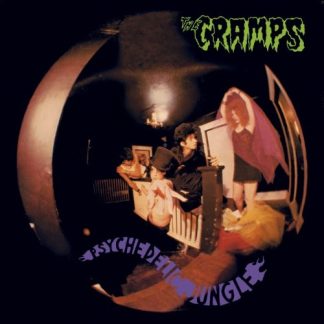 You're viewing: CRAMPS, THE:
Psychedelic Jungle
LP £25.00
Add to basket