First Haunted George recording released with Jimmy Hole on second guitar. Sounds like a great idea to me! “Buzzards…” is a creepy-crawler that barely moves, but just kind of swirls and buzzes in a slightly forward motion. George’s vox seem to emanating from a hell mouth of some sort with a sickening echo-delay. This is what Black Sabbath would sound like if they were two guys from some ghost town in Death Valley instead of the factories of Birmingham. Superb. “The Tomb” kicks it out a little bit, reminiscent of some of the work these two did in a nasty little outfit I loved called the Necessary Evils. If you don’t remember them, then you’re no friend of mine. Straight-up sick sounding guitar effects. One of, if not the best, of Haunted George’s singles, the extra guitar actually does punch-up/creep-out things a fair bit, and this really reminded I should listen to my HG records more often.

1. The Buzzards Ate His Flesh
2. The Tomb 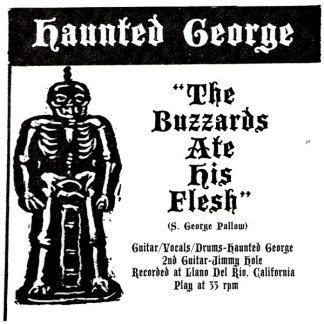 You're viewing: HAUNTED GEORGE:
The Buzzards Ate His Flesh
7″ £4.00
Add to basket