The Creepy Creeps Debut LP with 12 tracks of killer surf-garage punk on a split monster green&clear vinyl, that will provide you the soundtrack for the ultimate dance party! The band has gained cult status in their hometown San Diego and have built up a strong following on the back of awesome live shows where they dress as Mariachi Zombies. This debut has received airplay on Mark Lamarr’s BBC Radio 2 Show in the UK and allowed them to win a competition to support the New York Dolls in San Diego. Be prepared to embrace your new F****in band!!! Last copies!!! Get one while it lasts!!! 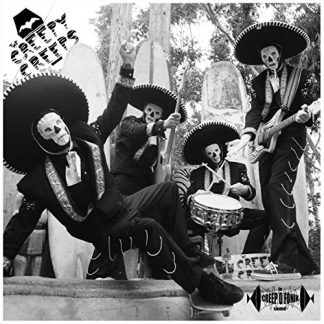