Five chaps brought together by a love of all things BEAT! After two years of performing in some of the toughest rhythm ‘n’ blues and beat nightspots, THE HI-CLASS JOES treat us with their very first album – ‘That Supersonic Beat’. Taking their cue from the British beat boom of the early sixties, the Joes are renowned on the scene for their strict attention to every sonic detail. The Joes play through original Selmer amplification, use Reslo microphones and a Shure Vocalmaster PA rescued from a top 60s nightspot. The Joes have a dynamic and exciting sound similar to THE KAISERS and early MILKSHAKES. ‘That Supersonic Beat’ combines a mixture their own self-penned tunes and some well chosen covers, such as Larry William’s ‘Slow Down’ or Chuck Berry’s ‘Talkin’ ’bout you’. Shindig Magazine says ‘they’re a real crowd pleaser, you could almost be back at the Star Club or the Cavern in its early heyday’. The Joes are hardened, tight and ready to excite! If you need a shot of rhythm ‘n’ blues, you got it! The Savage Big Beat Combo THE HI-CLASS JOES from Bristol, England present to you their high-class debut-album ‘That Supersonic Beat’! 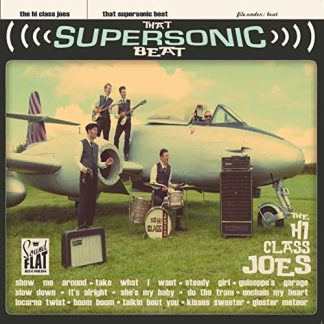 You're viewing: HIGH CLASS JOES, THE:
That Supersonic Beat
LP £15.00
Add to basket